I’ve been pumpkin picking!  I found a sweet pumpkin that will be perfect for making a pumpkin butter that will have a wood flavoring due to my grill roasting method on the gas grill.  When you make pumpkin butter, it’s crucial that you select a variety of pumpkin that is designed to be cooked.  My choice was a variety of “cow” pumpkin, known for its super sweet flesh and great creaminess for cooking. 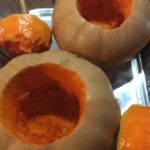 Pumpkin is packed with nutritional value including a high level of Vitamin A and C, antioxidants, folate, and has a low caloric level.   And, yes, they are rich in fiber.

Get to the pumpkin patch and find one or two sweet gems to bring to the grill for a wood fired sensation that makes for great pumpkin butter.

I’ll be using my gas grill for this recipe which means two-zone cooking which is really the only way I grill.  I need to start by lighting only half the burners on my grill which I’ve added a smoker box to that has three double filet hardwood chunks from SmokinLicious®.  This will provide for the great smoke flavor to the pumpkin flesh. 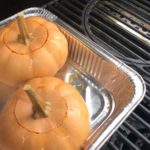 Tasting Notes: Other varieties of sweet pumpkin to consider include will usually be labeled sugar pumpkins or pie pumpkins.  However, other names to be on the lookout for include: Baby Pam, Baby Bear, Autumn Gold, Ghost Rider, Lumina, Cinderella, Winter Luxury, and Fairytale. 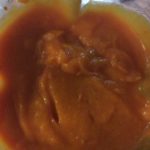 Once the pumpkins have been cleaned and seeded, it’s time to get them roasting on the grill with hardwood for added flavor.  I simply place my pan with the pumpkins on the unlit side of the grill, while my smoker box of wood chunks is placed directly on the heat shields of my lit burners.

Next, I let the pumpkins roast at 300°F for 50 minutes without disturbing them.  I do a check of the wood chunk pieces after 35 minutes and replenish if they have carbonized or turned black completely, as that means they are no longer producing flavonoids.

Once I can insert a knife point into the pumpkin flesh without resistance, I know the pumpkins are ready.  You’ll see that they become a deep bronzy-brown coloring on the outside while the flesh becomes deep orange.  I remove the pumpkins from the grill and allow to cool until I can handle them.  Then I scrap all the flesh from the skins into a blender. 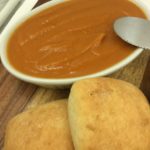 Although this is called a “butter” it technically is a fruit spread that is used like a butter on breads, pancakes, and crackers.  To make the butter, add ¼ cup of apple cider to the pumpkin flesh in the blender and blend until a thick paste is formed.  To that, add 1/3 cup brown sugar, 3 tablespoons honey, 1 teaspoon apple cider vinegar, ¾ teaspoon cinnamon, ½ teaspoon ginger, ½ teaspoon kosher salt, ¼ teaspoon ground nutmeg and a pinch of ground cloves.  Process until smooth.  Since I’ve wood roasted two pumpkins, I’m doubling the recipe ingredients.

Transfer the blended pumpkin mixture to a saucepan and bring to a simmer over medium heat, stirring occasionally.  Reduce the heat to low and allow the mixture to reduce by 1/3 and turn dark in color.  Total time should be 25 minutes.  Remove from heat and allow to cool.


I usually refrigerate my pumpkin butter at this point or even divide into individual jars for gifting or just to simplify the quantity put out on the table.  Today, I’m serving this pumpkin butter with some hot yeast rolls but there are plenty of other uses.  Think about folding it into whipped cream for a mousse-like dessert, use it as an additive to a sauce or soup, or even make your own yogurt flavor by adding to plain yogurt.  The best part, you can use different varieties of pumpkin to produce different flavors.

Tasting Notes:  One benefit of winter squashes is that there are many flavors that you can add.   Although I’ve gone traditional by incorporating cinnamon, ginger, nutmeg and clove, you can also consider using turmeric, cumin, chili powder, garam masala, Chinese Five Spice, sage, and even vanilla bean paste.  Experiment and you’ll find a flavor blend that is perfect.
Posted by Dr Smoke at 1:21 PM