If you’re like me, you love strawberries for the incredible juice they contain.  One of my favorite ways to capture the essence of that juice is to smoke the strawberries on a grill.  Not only do you end up with phenomenal smoked strawberries but the juice the grilling/smoking process renders is a must-have ingredient for so many recipes.  I took a batch of the smoked juices and made a fabulous marinade for fish, chicken, turkey, pork, lamb, and goat.

Whether you elect to use a standard gas grill or a charcoal grill, you’ll want to use wood chunks from SmokinLicious® to bring clean smoke flavors to the strawberries.  You can visit our previous articles on smoking on a gas or charcoal grill in Dr. Smoke’s Tips and Technique.

For me, I’m using a gas grill equipped with single filet wood chunks.  I prefer to use more mild hardwoods when smoking fruits like Ash, Alder, Cherry, and Maple.
I simply lay out my fresh strawberries on a sheet pan or disposable foil tray after cleaning and trimming the stems.  I place the pan on the unlit side of my grill using a medium heat setting on the burners that are on the opposite side.  It will take less than 30 minutes to bring the strawberries to the smoky side.  After the strawberries are tenderly smoked and the juices have rendered, I carefully remove the tray and all the strawberries to cool slightly.  I then transfer the juice to a bowl to be used in my marinade.

This marinade is so simple yet really packs great flavor.  Of course, the longer you marinate your protein, the better the outcome.  For one cup of marinade you’ll need:
In a large bowl, combine all the ingredients.  Select your protein: I recommend chicken, turkey, pork, lamb, or goat.  Place the protein in the bowl and coat completely with marinade.  Place the marinated protein in a resealable food storage bag, pouring the remaining marinade into the bag, and seal tightly.  Refrigerator for a minimum of 2 hours but preferably overnight 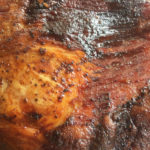 Now you can choose the cooking method to bring all the flavors together.  Grill, oven roasting or even smoking.  Once you’ve selected your cooking method, remove the marinated meat from the bag and cook until done.  Remember, the marinade has been used on raw meat so you cannot reuse it as it will contain some bacteria.
Posted by Dr Smoke at 6:33 AM No comments:


I came across a fascinating article in Wine Spectator (June 15, 2018) that made me salivate.  The article focused on the wildfires of California, specifically Northern California, in October 2017 that had vineyards struggling with grapes that had not yet been harvested for wine production and were exposed to the fire’s smoke.

There were many California wineries that sent grape and juice samples to labs for analysis to determine if compounds indicative of smoke exposure existed (probability is said to be 70% with testing).  Specifically, they test for the primary volatile phenols present in smoke.  This research and technique have its base in extensive research done in Australia who experience bushfires more commonly than Californians experience wildfires.

If these volatile phenols are found in the sample, this means the waxy cuticle of the grape skin absorbed the compounds forming glycosides.  At this stage, the phenols are not detectable by smell or taste.  Once the fermentation begins, the acids break down the bond making the phenols volatile again.  Additionally, our own mouths can breakdown remaining glycosides releasing the smoky flavors when the wines are consumed.

Though there is a risk to white wines, these tend to be less susceptible to smoke taint since most are not fermented on their skins.   Wines fermenting in tanks and barrels during the fires also appear protected by the layer of carbon dioxide that forms.

For those wines found to have the smoke taint, the vineyard is faced with options:

I have another idea!  Along the lines of selling the wine to another user, why not market this to Chefs, cooks, and barbecue enthusiasts who understand and desire those charry undertones.  Think about the sauces, marinades, glazes, and assorted other uses these tainted wines could be used in.

Think about how many people use handheld food smokers to get a smoky undertone to liquids, whether a cocktail, syrup, juice, even water.  With a bottle of this tainted wine, blooming with an ashy component, you have ready-made umami for those of us searching for the perfect ingredient to bring a balanced smoky undertone to a recipe.

Here’s my suggestion: think about contacting one of these vineyards to see if they would be willing to sell you some unmarked bottles.  They wouldn’t have to label them with their pristine brand, just sell it as is to those of us who love that undertone.

Some of the vineyards with tainted wine: The Hess Collection, Jackson Family Wines, Jarvis Wines.

I don’t know about you, but I’m sure going to try to get my hands on at least a couple of bottles of the smoke-tainted wine as my recipes are just waiting for this special ingredient!

Peppers are one of those thick-skinned vegetables that release their ultimate flavor when they are introduced to hot coals.  Many people think that you need special equipment to cook foods in hot coals but really, it’s as easy as having a disposable pan available and a grill.  I’ll give you some options for roasting the peppers and then provide a great recipe to be used as a dip or topping that is quick and so easy.

Although you will see me using an open pit method of charring my sweet peppers, you can do this on a gas grill set up with either a disposable foil pan or a cast iron pan or skillet.  You can also use a charcoal grill, lighting a fire and allowing it to reduce to simple hot embers.  A portable fire pit works if you clean out all previous ash and wood pieces to keep the final flavors clean.

Here’s the key to making perfect charred peppers, whether sweet or hot.  You must only use hot embers and you need to have additional hot embers available to keep a consistent temperature and a full bed of coals.

Because peppers are loaded with water, it is easiest to clean the skins and seeds from them once they are fire roasted.  If you cover the charred peppers placed in a bowl with plastic wrap, the skins will pull away easily.  Then you’re ready for your favorite recipes.

What makes this recipe so great is that there are only a few flavorful ingredients that balance out the charry, smoky flavor of the peppers.  For this recipe, you’ll need the following: 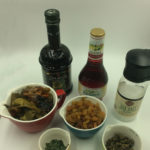 Once the peppers are charred, I like to quarter them before placing in a food processor.  You can use a blender as well if you have a control to pulse the ingredients as you don’t want to thin them too much.  After pulsing the 6 charred peppers, add the raisins, oil, capers, and oregano.  Pulse to combine everything.  Season with salt and vinegar.  This dip can be refrigerated for one day prior to use.

This dip/topping made from ember-roasted sweet pepper contains all vegan ingredients so its super flavorful while being healthy too.  Here’s the best part – it has so many uses and can be altered for a specific taste.  Use it as a topping for fish, chicken filet sandwiches, or sausage patties and links.  It can be heated providing an option to use it as a hot appetizer or cold.  I’ve served this will flatbread or Naan slices for a snack, appetizer, or lite lunch.  Want some kick to it?  You can add ember fired hot peppers as well or just add a few drops of hot sauce to the mix.  Because this is oil based, it is best to use up any leftovers within a few days, keeping it refrigerated until gone.
Posted by Dr Smoke at 7:47 AM No comments: 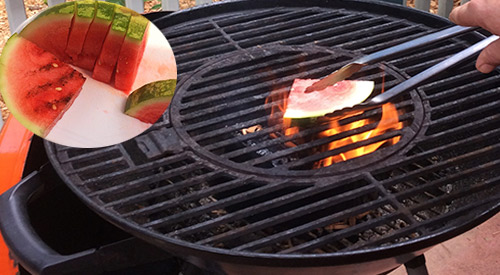 You may have seen segments on grilling watermelon before which show slices of watermelon on a standard gas grill.  Although I agree that the heat generated from the grill will produce a sweet outcome, there is no comparison to doing a grilling technique that incorporates wood for added flavor.

In this segment, I’ll show you how to grill watermelon on a grill of your choice with wood chunks for the unique combination of sweet and char flavors that only comes from grilling with wood.

I think this is by far, the easiest preparation for the grill.  All you need is a watermelon of your choosing and a grill; gas, electric or charcoal.  Just 2-3 wood chunks from SmokinLicious® and about 20 minutes once you have a lit grill, and this method of bringing flavor to the standard watermelon will be complete.

As watermelon contains a lot of water, it is essential that you work with a medium heat setting on your gas grill and hot coals with a moderate flame for the charcoal grill.  If using a gas grill, be sure to set up the wood chunks on just one side of the grill and allow the chunks to smolder first so there is plenty of smoke vapor.  Since watermelon grills in no time at all, you want to have enough smoke vapor produced to give a great tasty outcome for both a gas grill or charcoal grill method.  Electric smokers are self-contained allowing for simple dialing in about 15 minutes worth of smoking time.

For the watermelon, cut lengthwise in half and cut each half into individual slices about 1-1/2 to 2” thick.  Or, you can remove all the rind and grill just the watermelon meat.  Keep fire safe tongs at the ready so you can turn the watermelon slices just once as they evaporate some water and sweeten up.  DO NOT leave the grill!  This fruit requires a careful watch so stay put and you’ll have every piece cooked to perfection.

You’ll see how the watermelon darkens in color, get bits of char coloring to the skin, and is less water soluble.  That’s the perfect outcome.  Now it’s time to think about how to use your wood flavored melon.


First, you can enjoy it as is.  When I serve this naked, I just give one additional flavor such as fresh, chopped mint.   But if you’re looking for a lunch or lite dinner entrée, think salad by including some baby arugula, goat cheese and a splash of balsamic vinegar.  For a spicy version, sprinkle the wedges with red pepper flakes, a bit of granulated sugar, and lime zest.  Wood fired watermelon also works great with other summer favorites like grape and cherry tomato, pepper slices, sugar snow peas, and cucumber.  No matter how you choose to serve it, grilled watermelon with wood flavoring is going to top your list of grilled favorites.

Proving that there’s more to wood-fired cooking than just animal proteins, SmokinLicious® brings you great ideas for recipes featuring a wood-fired ingredient.  Bringing you tips, techniques, recipes and the science behind the fire and smoke.
Posted by Dr Smoke at 8:12 AM No comments: